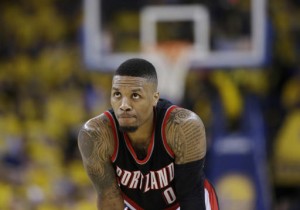 FILE – In this May 3, 2016, file photo, Portland Trail Blazers’ Damian Lillard pauses during free throws during the second half in Game 2 of a second-round NBA basketball playoff series against the Golden State Warriors, in Oakland, Calif. The start of Lillard’s playoff series against Golden State has been rough. As Lillard goes, often so do the Trail Blazers. Portland is down 2-0, but Lillard seems to perform best when tested. (AP Photo/Marcio Jose Sanchez, File)