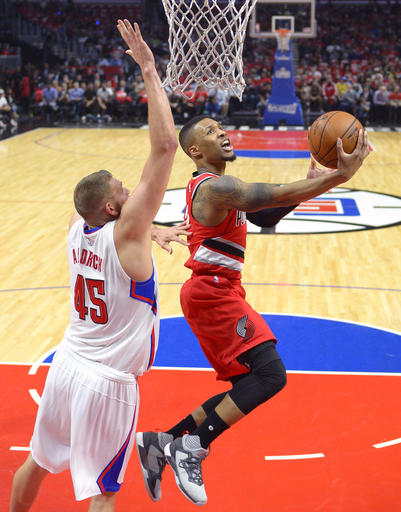 It was tight for most of the game but then it was Lillard Time. Damian Lillard exploded in the fourth quarter, aiding CJ McCollum who carried the load all night long and thus helping Portland pull away from the shorthanded Los Angeles Clippers 108-98. McCollum led the Blazers with 27 points and four assists while Lillard scored 22 on the night, with 16 of those points coming in the fourth quarter. The Blazers hold a 3-2 lead in the best-of-seven series. Game 6 is Friday night in Portland where the Blazers will have an opportunity to secure their spot in the second round against the Golden State Warriors.

The Blazers held off a furious Clippers effort without Chris Paul and Blake Griffin but Portland’s two stars exploded late in the game Terry Stotts made one slight move to help give Portland an edge late. Instead of going with his normal fourth quarter rotation, Stotts went to Damian Lillard to start the fourth quarter, getting him matched up against Pablo Prigioni. The result was eight points in the first three minutes of the fourth to jumpstart Lillard who was struggling up to that point.

Lillard turned the 38-year old Argentine into churrasco and Allen Crabbe (11 points, 4-10 FG) provided the chimicurri. An Ed Davis hook shot put the Blazers up by 10 but Aminu and Harkless both found themselves in deep foul trouble with five fouls. As a result, Stotts got Lillard in earlier than usual, knowing how important this game would be if Portland could win.

The Clippers started the game with a small ball line-up, which was expected, though not in the way I predicted in the scouting report. He elected to leave Jeff Green in his role as a reserve, moved Luc Mbah a Moute to the bench and turned to veterans Paul Pierce and Jamal Crawford in an all important Game 5. It was a gamble that valued their shot-making over defense and although it kind of worked early, that strategy backfired when the starters played to start the second half. If the Clippers could steal this win, their chances of winning the series would be strong. A JJ Redick 3-pointer on their first offensive possession looked to give them energy but it didn’t get anything going for the rest of the team.

Early on in the game you could notice the absence of Chris Paul when Harkless led a fast break that led to a 3-point attempt but no points. You would have rarely seen a Blazer other than Plumlee and the two guards bring the ball up the court the way he did and it was an example of how free the Blazers could be without Paul. Though, they were probably a little too free at the start and Harkless kept them in it. A few seconds later, Harkless got a bucket and then went coast-to-coast for Portland’s first two baskets. The weakness with whomever has guarded Harkless was no longer hidden or hard to exploit and the Blazers just kept going at it. With the Clippers defense still geared towards stopping Lillard and McCollum, Harkless gave them a lift early and continues his huge playoffs ahead of free agency, scoring 17 points and seven rebounds in the first half.

The first quarter was a struggle for both teams offensively. The Blazers missed seven of their first eight 3-point attempts with their only make coming from Harkless. Lillard got some decent open looks but they didn’t fall and despite Harkless’ good start and an early exit for DeAndre Jordan thanks to foul trouble, they were tied at quarter.

Then the Blazers bench, which had been unable to extend leads or cut into them very much in the first two games in Los Angeles had their big break. A couple of 3-pointers from Crabbe and Gerald Henderson gave Portland a 6-point lead and forced a timeout from the Clippers early in the quarter. But the Clippers scratched and clawed to keep the Blazers offense from getting rolling. Meanwhile, Portland’s offense struggled against the Clippers’ pressure.

Defensively, the Blazers were not in the same form that they were in game’s 2-through-4. Lillard still couldn’t get going and although the Clippers offense was better than it has been recently, it wasn’t enough to really create distance as Crawford and Redick missed a hand full of open shots.

The Blazers started the second half the way they needed to, defending furiously and setting the tone as the better team. Lillard connected on his first field goal of the game with a pull-up 3-pointer to give the Blazers a 51-50 lead with just under 10 minutes left in the third. The Blazers continued that run, keeping the Clippers scoreless and turning up the defense. It wasn’t the start of a roll for Lillard, though. At least not yet. The Clippers didn’t get on the board in the second half until a Jeff Green free throw with 6:24 left in the third. Their first second half field goal didn’t come until the 5:48 mark with a Crawford jumper.

Then with under five minutes left, Aminu picked up a crucial fourth foul but instead of the game getting out of Portland’s grasp, they took control. The Blazers noticed that with Rivers not electing to play Mbah a Moute, there was no longer a strong defender on McCollum and McCollum took over. The Blazers built a 9-point lead and looked like they were on their way to taking over the series, but the Clippers kept fighting and found themselves tied going into the 4th quarter.

Then the run that had been building finally came. McCollum hit a backbreaker and then Lillard hit another big one to put the Blazers up by 16 points with just over four minutes left in the game. It was like two human exclamation points. Lillard threw in a couple more wild shots, what could be a karmic return for all the open shots he missed in the series. The Clippers of course made their runs and locked down defensively but the Blazers employed the Hack-A at the correct moments to stop their momentum.