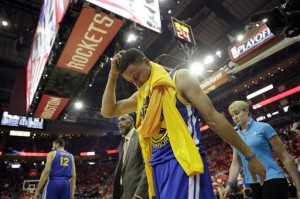 Golden State Warriors’ Stephen Curry heads off the court and to the locker room at the start of the second half in Game 4 of a first-round NBA basketball playoff series against the Houston Rockets, Sunday, April 24, 2016, in Houston. Curry was injured at the end of the first half. (AP Photo/David J. Phillip)