Bulls vs. Blazers NBA Podcast: Deja Vu’s From the #6ix 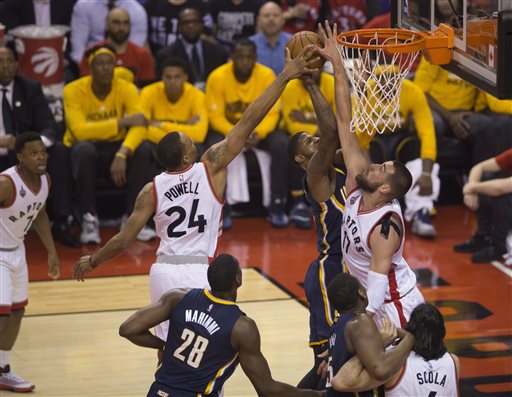 Hey everybody, welcome to another live recorded edition of the Bulls vs. Blazers NBA Podcast as Sean will be joining me here in Portland throughout the playoffs. The first round has been disappointing but at least we can always count on the Raptors to be the higher seed to make things interesting. They bounced back in Game 2 but leave Toronto after losing home court advantage for the third season in a row.

Also, down in Oklahoma City, Kevin Durant had the worst game of his life and the Thunder late-game offense looks like he, too, is living a recurring nightmare. Wesley Matthews, Dirk and Rick Carlisle worked their way to a Game 2 win and will give Durant and Russell Westbrook all they can handle. This ain’t, Western Kentucky, Coach Donovan.

We talked about every other series briefly, since that’s all the analysis most of these series’ really deserve.

And of course, we did a deep dive on Blazers-Clippers. I did a more extensive breakdown of the x’s and o’s in the Scouting Report for Game 2. We talked about what it means that Blake Griffin looks to be close to 100 percent and whether the Blazers role players can play that poorly again. We both picked Portland and although we don’t feel as good as our picks, we still believe the reasons we picked the Blazers can show up in this series.

After playoff chatter we discussed the latest news on the NBA coaching carousel. Kenny Atkinson coaching Brooklyn? Okay, maybe not. The No-Nets rule extends to coaching hires until further notice but we did break down the Earl Watson hire in Phoenix, the candidates in Minnesota and who we are hoping for to join the cast of “Love & Hip-Hop: Sacramento.” Spoiler: Mama, there goes that man.