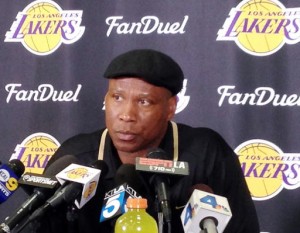 Los Angeles Lakers head coach Byron Scott speaks to reporters at team headquarters in El Segundo, Calif., Friday, April 15, 2016. With Kobe Bryant’s $25 million salary, ravenous shot selection and dominant personality gone from the basketball team after 20 years, Scott expects to be a part of the Lakers’ life after Bryant. Scott said he anticipates returning to the team next season despite presiding over the two worst years in the history of the 16-time NBA champion franchise. (AP Photo/Greg Beacham)