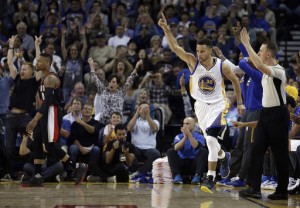 Golden State Warriors’ Stephen Curry celebrates a score during the first half of an NBA basketball game against the Portland Trail Blazers, Sunday, April 3, 2016, in Oakland, Calif. (AP Photo/Ben Margot)