Warriors pull away from Blazers in the 4th quarter 136-111 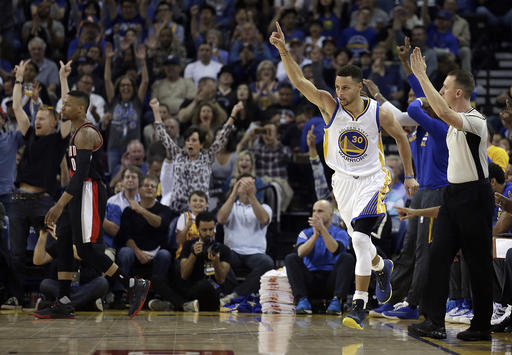 The Portland Trail Blazers played with energy and were focused for Sunday evening’s tilt with the defending champion Golden State Warriors. Nevertheless, the Warriors improved to 69-8 with a 136-111 victory over the Blazers, separating themselves for good in the 4th quarter. Stephen Curry led the way for Golden State with 39 points. Damian Lillard snapped out of his shooting slump and dueled Curry, which was the highlight of the night, finishing with 38 points on 13-for-27 shooting.

Although the Blazers lost, the most important thing for them is that they are still within a half game of the fifth seed in the West thanks to Memphis’ loss to the Orlando Magic Sunday.

CJ McCollum had a decent game but didn’t provide Lillard with a performance worthy of his talent. The Warriors defense is tenacious and forced him into some turnovers, which piled on to a rough shooting night. After a poor defensive first quarter, the Warriors tightened things up in the next three quarters to keep their chase for history alive. The Blazers kept things within single-digits but the Warriors eventually kicked things into another gear that the Blazers just didn’t have Sunday.

The Blazers got off to an efficient start, sparked once again by the energy of Maurice Harkless. Harkless got the game’s first bucket in the post on Draymond Green then hit a 3-pointer later in the first quarter. But against the Warriors, the game never stops and they prefer to turn the game speed up a few notches. The Blazers current starting line-up has been playing at a much faster pace than their previous line-ups and are naturals in a fast-paced environment.

Pace aside, the Blazers needed  Lillard to get going if they were going to keep up with the Warriors. Lillard delivered with one of his best shooting quarters in quite some time, pouring in 14 points and matching Curry shot for shot. The Blazers outplayed the Warriors and looked to have more energy even though they played the night before. The key would be keeping up the energy. Obviously, they couldn’t keep it up.

The Warriors bench brought them closer with Lillard on the bench. The Warriors defense tightened the screws defensively, forcing the Blazers to run down the shot clock much longer than they were in the first quarter when they had it flowing. The Warriors renewed focus made things more difficult for the Blazers, but not impossible.

The Blazers bench was able to tread water well enough to keep the game close before the starters could get back into the game. Harkless’ energy buoyed the Blazers all night and Aminu continued to provide spacing on offense and excellent defense. But in the final 90 seconds the Blazers were unable to regain control from the Warriors and Golden State went into halftime with a 63-56 lead.

Harkless had 15 points and eight rebounds while Aminu 10 points, six rebounds and five assists. They played well but not as well as Draymond Green. Green was dominant with a triple-double of 22 points, 10 rebounds and 10 assists. Klay Thompson also pitched in 21 points.

The third quarter was similar to the second as the Warriors made a run, forcing the Blazers to catch up. The Blazers, mostly Lillard, had some answers to keep the game close. Curry started to take over once again with a spree of 3-pointers that got the Oracle crowd going nuts. Lillard answered the bell to keep Portland at arm’s length, which is enough to keep things interesting against the Warriors who play at such a fast pace that leads are never as big as they seem in either direction.

But as they did in the second quarter, the Warriors bench extended the lead amid constant statements that they are rudderless without Andre Iguodala. The Blazers bench are no slouches, but the Warriors veterans rose to the occasion in both halves and clearly outplayed them.

Stotts pulled out all the stops, though, starting the fourth quarter with Lillard and McCollum in the game together, which he rarely does. It was an obvious reaction to the fact that the game was in the danger zone and Lillard leaving the game Sunday would mean a blowout. The Blazers needed everything they got from Lillard, drawing fouls and making shots.

Down by 14 in the 4th quarter, the Blazers went to Aminu at center to change things up with just under seven minutes left in the game. A McCollum 3-pointer got them back to within single-digits with 5:48 left.  After that the Warriors blew the game open on their way to a 25-point victory.