Trail Mix: Tiebreakers and turning up the heat on Memphis 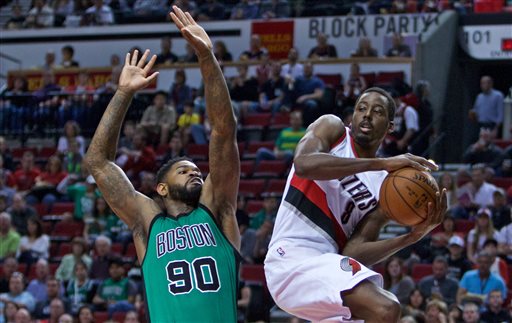 The Portland Trail Blazers scored a major victory Thursday night over the Boston Celtics, 116-109. With the victory, the Blazers are now 1 1/2 games behind the Memphis Grizzlies, who have been a walking infirmary since the All-Star break. The Blazers took Friday off from practice ahead of Saturday’s match-up against the red-hot Miami Heat, coming off a disappointing road loss to the Lakers.

Playoffs are all but guaranteed, but the seeding could get a little complicated.

Portland’s magic number to clinch a playoff spot is at 4. Any combination of Blazers wins and Houston losses that add up to four will guarantee the Blazers a spot. Although making the playoffs is the first goal for the Blazers, they have a golden opportunity to climb higher in the standings and draw a more desirable match-up against the Clippers.

The Clippers are a very good team and better than the Blazers. However, their lack of depth and the fact they will still be trying to acclimate Blake Griffin into the team after playing most of the season without him, gives the Blazers a fighting chance to knock off the Clippers. But this series is going to be terrible to watch, I can’t even lie. The Blazers will hack DeAndre Jordan with impunity, which might get young Cliff Alexander a few playoff minutes just for this express purpose. And the petty return Hack-A’s from Doc Rivers are going to be unbearable. It will be a competitive series and a more winnable one for the Blazers than a match-up against Kevin Durant and Russell Westbrook, but it will be an eye sore.

Griffith also penned a pretty good list of important moment that need to be covered in the upcoming HBO Sports documentary about the “Jail Blazers” Blazers teams of the early aughts, just in case Bill Simmons needed a little more help.

Mike Richman of The Oregonian broke down some important games on tonight’s NBA schedule which will have implications on the Blazers’ seeding situation.

Anne Peterson of the Associate Press penned a nice feature on Damian Lillard and CJ McCollum, their relationship and push towards the playoffs.

Casey Holdahl and Joe Freeman recorded another episode of the Rip City Report.

Holdahl also took an interesting angle on the Blazers chase for the 5th-best record in the Western Conference, which is where they finished last year, even in an objectively deeper conference.

And while we’re sharing podcasts, I would be remiss if I didn’t share the latest episode of my “Bulls vs. Blazers NBA Podcast” co-hosted by myself and Sean Highkin, who covers the Bulls and the NBA from Chicago for Bleacher Report, NBC’s Pro Basketball talk and Sports on Earth. We’ve had a running gag all year that the Lakers are a reality show called “The Real Lakers of Los Angeles,” and this week they delivered with a salacious NBA scandal worthy of the name.

You can follow the Bulls vs. Blazers NBA Podcast on Soundcloud, iTunes, or Stitcher Radio. Leave us a five star review.