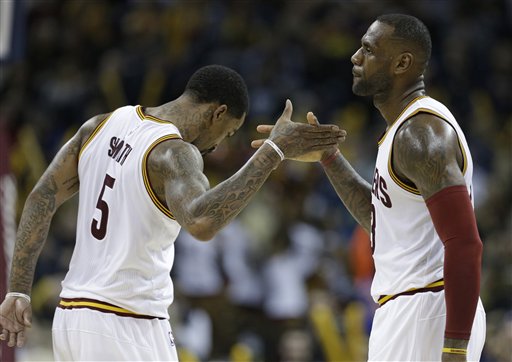 Three weeks from today will be the first day of the NBA playoffs. With March Madness ramping back up again, it’s the perfect time to check out. But LeBron James doesn’t want you to. He unfollowed the Cavs twitter account then dodged questions in a way that drew more attention to it.

Sean and I discussed his odd twitter/social media antics as well as a host of other stories coming from the set of “Keeping Up With the Kavs.” Do you think Kyrie Irving and Kevin Love are feelign more alienated by LeBron discussed his desire to play with Carmelo Anthony as well as other veteran stars like Chris Paul and former teammate Dwyane Wade. Teammate J.R. Smith signed with Klutch Sports as well.

We discussed what we know so far regarding the upcoming “Jail Blazers” documentary, speculate on who may be producing it (even though it’s now been confirmed that it is an HBO production) and discuss guests that they must have if the film is to be a success. We also covered the statement from the NBA regarding North Carolina’s discriminatory anti-LGBT law that was recently passed and the impact it may have on Charlotte’s hosting of the 2017 NBA All-Star Game.

As always you can follow the Bulls vs. Blazers NBA Podcast on Soundcloud, iTunes, or Stitcher Radio. Leave us a five star review. Thanks for sticking with us.