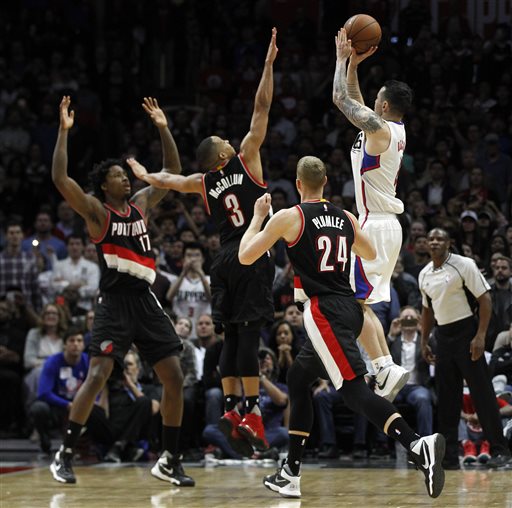 Although the Blazers are in sunny Southern California, they’re probably feeling the old saying “when it rains, it pours.” The Portland Trail Blazers lost an ugly, but hard-fought game to the Los Angeles Clippers, 96-94, capped off by a JJ Redick buzzer-beating jumper. The Blazers led by as many as seven points in the final three minutes but the veteran Clippers stormed back to hold off the Blazers and hurting Portland’s slim chances of passing the Memphis Grizzlies for the 5th seed.

Meyers Leonard is done for the season and will undergo season-ending shoulder surgery Friday in Los Angeles. But perhaps we should have known something was off when the team made big changes on Wednesday night, moving Moe Harkless into the starting line-up and going to a smallball look to start the game.

As I wrote in my gamer Wednesday, the Blazers have every reason to stick with the small line-up. It’s been their best combination of the four regular starters (Lillard, McCollum, Aminu, Plumlee) and one other player. The difference? It can mostly be reflected in their pace. That line-up turns the pace up to over 100 possessions per 48 minutes and you can see that with how they run the floor with that line-up. Harkless cutting and offensive rebounding has added another dimension. Harkless had 10 points, eight rebounds and finished with a team-best +/- of +15.

The Blazers were shooting below 40 percent for much of the half and were sloppy with the ball on the offensive end. They finished the game shooting 40 percent and 25 percent from 3. This allowed the Clippers to stay in the game and get the lead back with only a few minutes left in the third. The Blazers struggled to get going offensively and resorted to the Hack-A-Jordan against Clippers center DeAndre Jordan. The Clippers tried to do it to Plumlee but didn’t have enough fouls to send him to the line. The Blazers didn’t look like they would fare any better early in the second half. The Clippers extended their lead, but only momentarily. In an ugly game, the Blazers were able to find a way to get the Clippers on their heels. Lillard attacked the rim and helped Portland get the Clippers into the penalty. Seconds later, Jordan picked up his fourth foul and had to be subbed out with over half the quarter left to go.

The Blazers had a golden opportunity with the Clippers’ game-changer on both ends. But thanks to the swashbuckling of Jamal Crawford, the Clippers turned a deficit into an advantage, leading by as many as six points after Jordan went to the bench. The Blazers were tied after three but it took a buzzer-beating 3-pointer by Allen Crabbe to do it. Although the Redick shot was the game’s memorable play, this stretch was one where the Blazers blew a major opportunity.

Stotts went back to small ball, playing Harkless at power forward, which as we alluded to after last night, is a sign of things to come. It was a good look again and down the stretch it looked like the Blazers were kicking things into gear.

Their final offensive possession was a disaster and it was interesting that Mason Plumlee didn’t get the call to be in the game on that possession. It’s easy to second guess everything, but when Lillard didn’t get open, having Plumlee’s patience and skill as a playmaker would have been an asset when the play broke down. Ed Davis got the ball to Harkless, who attacked the rim but didn’t make the shot or draw a foul call.

Before that, Lillard and McCollum looked like they were going to do just enough to steal the Blazers a win and keep hope for No. 5 alive. Jamal Crawford hit big shots all night long and Redick pushed through a rough shooting night to come up big.

The Blazers did almost everything they needed to do on a bad shooting night to get what may have been their most impressive wins of the year. Instead they come back home with more pressure to take care of business in a four-game home stretch, which begins Saturday against Philadelphia.