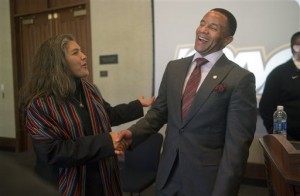 Former Arizona star and NBA Rookie of the year Damon Stoudamire speaks with Dr. Ines Ruiz-Huston after after being named the new head coach of the University of the Pacific men’s basketball team, Wednesday, March 16, 2016, in Stockton, Calif. Stoudamire spent the past seven years as an assistant coach with the NBA’s Memphis Grizzlies and in college at Arizona and most recently Memphis. After a stellar four-year college career at Arizona, Stoudamire played 13 seasons in the NBA with Toronto, Portland, Memphis and San Antonio. Ruiz-Huston is the UOP Latino Community Outreach Coordinator. (Clifford Oto/The Record via AP)