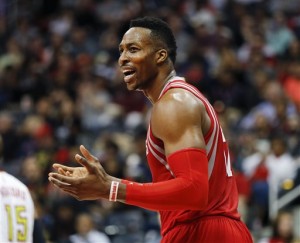 Houston Rockets center Dwight Howard (12) reacts after being called for a foul in the first half of an NBA basketball game against the Atlanta Hawks Saturday, March 19, 2016, in Atlanta. (AP Photo/John Bazemore)