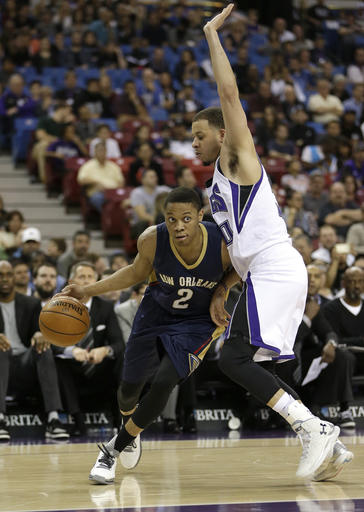 Outside of Golden State, San Antonio and to a lesser extent Portland, the 2015-16 NBA season has been marked as a season of disappointment. And nowhere is sense of disappointment more apt than on the bayou with the Pelicans. A season that many thought would be a continuation of Anthony Davis’ ascendence to the top of the league has stalled thanks to injuries all over the roster.

You saw the list above. Even D-League call-ups like Dejean-Jones have been bit by the injury bug. Pondexter hasn’t even played this year. Jrue Holiday was playing but didn’t crack the 30 minute mark in a game until January after dealing with stress reactions in his leg. Everything outside of Davis has come crashing down and perhaps more concerning in year one under Alvin Gentry is that they didn’t get to see what their pieces could do in Gentry’s system.

Davis can still take over a game, as he did against the Pistons about a month ago when he dropped 59 points and 20 rebounds. Ryan Anderson is a problem if you don’t guard him, a bold strategy employed by the Kings on Wednesday. Anderson is set to become a free-agent this season and it’s too bad for the Pelicans they didn’t get to see what he and Davis could do with a healthy team.

But this situation hasn’t been all bad and earlier in the week the Pelicans signed former Blazers point guard Tim Frazier who was killing the D-League with the Maine Red Claws. He got 26 minutes of run on Wednesday against the Kings and will reportedly get the opportunity to start against his buddies Lillard and McCollum.

Jrue Holiday is a quality guard and with the way the Blazers have been playing defense lately, he should put up solid numbers.

However, the Pelicans are wounded and they are playing Dante Cunningham extended minutes at small forward. The Blazers have the best opportunity they have for a win on this trip Friday and with Utah suddenly surging, a loss to the poor Pelicans would add unnecessary strain to an already tough task.