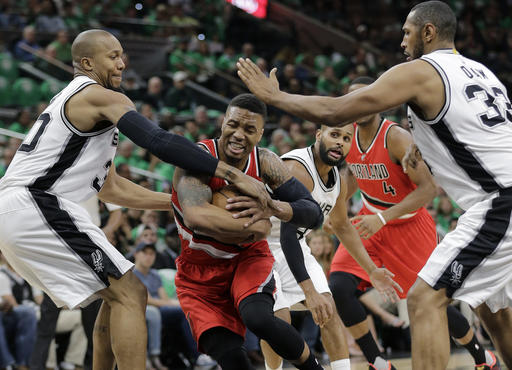 The Portland Trail Blazers hung with the San Antonio Spurs for a half but in the end, the Spurs won at home for the 34th straight time this season, 118-110. LaMarcus Aldridge and Kawhi Leonard each scored 22 points to lead the Spurs. CJ McCollum had a game-high 26 points and Damian Lillard had 23 points and six assists.

The Blazers started the game fairly well and had one of their better starts of the last month but a 39-point 3rd quarter would be their undoing. They were only three points down when Stotts took out their first rotation of big men and they were surprisingly hanging with the Spurs, who came in to the game undefeated at home through 33 games.

Although the Blazers lost, this was expected. But their performance, at the very least, was an improvement from Monday’s ugly 34-point loss to the Thunder.

Without Meyers Leonard, the Blazers have a major hole they have to fill in the rotation. They did so with small ball and with Harkless at power forward instead of Leonard, what they lost in shooting ability they made up for in pace. The Blazers looked to run much more when their second unit entered the game Thursday. Their youth is one of the few advantages they have against the Spurs and they used it to their advantage.

Things slowed down a little bit when Gerald Henderson picked up his third foul with 11 minutes left in the 2nd quarter. This foul trouble forced Stotts to go go super small with Brian Roberts alongside CJ McCollum. But the Blazers managed things pretty well. They continued to make the most out of their offensive sets both inside and outside. The Blazers success came from the play of their guards but their players in the 4 and 5 spots played well. Even Chris Kaman got some second quarter run and made the most of it, canning a midrange jumper. He also had a nice block that led to a Blazers 3-pointer in transition.

It was clear early that the Blazers guards could expose the Spurs lone defensive weakness, the point guard position. With the Blazers flying arounds screens, the Spurs elected to switch but this got Parker in difficult situations with McCollum, who took advantage of the mismatch. McCollum had a team-high 14 points at halftime while Lillard pitched in 10.

But disaster struck as the teams were just about to go to the locker room. Patty Mills smartly tried to draw a foul with the clock running down and was rewarded. The Spurs took a two-point lead into halftime after the foul.

Then the Spurs started to do Spurs things. They began the 3rd quarter on a 10-0 run and it looked like the game was getting out of hand. Lillard picked up his 4th foul with eight minutes left and the Blazers down 11. Leaving Lillard in didn’t result in his picking up a 5th foul but his presence wasn’t enough to keep the Blazers in it. Soon the lead was up to 18 and although the Blazers played pretty well offensively, they couldn’t withstand the offensive onslaught of a 39-point quarter from the Spurs.

The Blazers kept things in the teens during the 4th quarter and even cut the Spurs lead to single-digits, forcing Gregg Popovich to keep most of his starters in until the final 90 seconds. Lillard got going a little bit and the Blazers got some unconventional offense out of Mason Plumlee. They were unable to do enough to make it count, even if they forced Popovich to call a bunch of timeouts in the 4th quarter whenever the Blazers would score on consecutive possessions.