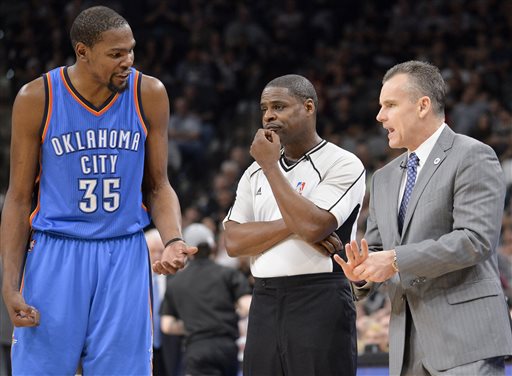 The Oklahoma City Thunder may not be the best team in the NBA but they certainly have a case for the most interesting team. They have played three memorable games against the Golden State Warriors but all of them were losses. But that hasn’t been uncommon for the Thunder this season. They’ve lost a league-high 12 games this season when leading after three quarters, including Saturday in San Antonio.

In contrast to the last season that Westbrook and Durant were relatively healthy, the Thunder haven’t been very good in the clutch. According to NBA.com, the Thunder had a net rating of 8.1 in the clutch in the 2013-14 season and so far this season they have a -4.2 net rating. And part of that could be that Durant isn’t getting the ball as much as he used to. He’s averaging as many touches per game as Utah’s Rudy Gobert according to Josh Eberley.

And in the clutch numbers there is another interesting finding. Kevin Durant’s usage rate is at 40 percent this season and was at 45 percent during his MVP season, the last season he was healthy, according to NBA.com. He had a true shooting percentage of 53.2. That dip hasn’t all shown up in the Westbrook column, but enough of is has gone away from Durant that it’s troubling. His true shooting percentage in the clutch is 58 but he’s getting it less than he did when he was the MVP. Westbrook is getting a little more, but not much and for whatever reason, Durant isn’t getting the ball as much down the stretch.

Although those are interesting numbers, that’s not the only reason why the Thunder have struggled to win games. Their defensive effort has wavered from game-to-game and possession-to-possession far too often.

Their last meeting with the Blazers in Portland was a perfect example. During the middle of the game, the Thunder were playing shutdown defense. Then they blew a double-digit lead and Damian Lillard took over the game. When the Thunder get locked in, you can see their incredible potential. Andre Roberson can guard everyone and Durant knows how to move his 7-foot frame. Ibaka is a rim protector, Adams is a dirty work guy and Westbrook is excellent when he doesn’t gamble. However, he does far too often and that’s often where the Thunder defense breaks.

This could very well be a preview of the first round of the playoffs. If the season ended today, the Blazers would be playing Game 1 in Oklahoma City. While it’s not an ideal match-up for Portland, it would be much more realistic to expect a competitive series than it would be against Golden State or San Antonio. Given the inconsistency of the Rockets and the decline of the Mavericks, the Thunder would likely want to avoid Portland also. If the Blazers want to get this match-up, a win on Monday will help their chances.

And underneath all of this is the real possibility that Durant could leave at season’s end. First year head coach Billy Donovan hasn’t made much of an impact on the Thunder in what’s viewed as a make-or-break season. The whispers have already started. We touched on the Durant situation in the latest Bulls vs. Blazers podcast.