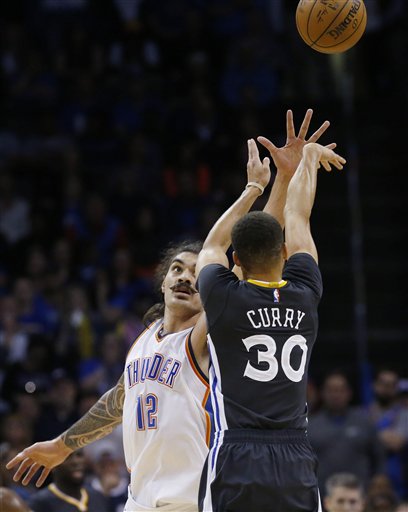 New addition: Former Trail Blazers great Anderson Varejao, who was traded by Cleveland and subsequently waived by Portland before going to Golden State. The addition of Varejao came at the cost of Jason Thompson, who is now in Toronto.

The pace in both of these games has been frantic, coming out to an estimated 106 possessions per 48 minutes according to Basketball-Reference. That’s six more possessions than the Kings, who lead the league in pace, average per game. The Warriors are No. 2 in pace. The Warriors dominated the first meeting and the Blazers did the same in their second meeting in the Northwest.

“The first game, we played and they got the best of us and I think in the 2nd game we got the best of them,” said Allen Crabbe who has been quiet lately but is averaging 13.5 points against the Warriors this season. “Obviously they’re going to change some things up that we did really good. But if we have another 50 point performance from Dame we’ll be in a pretty good spot to win the game.”

Playing the Warriors has been bad news for quite some time but at Oracle Arena they’ve been invincible this season. They are 28-0 at home this season. They’ll have to hope that the Splash Bros. miss, but but they also have to be cognizant of all the little ways they can hurt you. A smart back cut, a missed box out, every little thing will be exploited. And mental energy will be a key to any success against the Warriors. The Blazers are walking into a lion’s den, but their success was fueled by going right at the beast.

Lillard and Curry went toe-to-toe from the start but every single one of Portland’s role player played like they belonged. That has to happen again if they want to pull off the upset or even keep the game close. They attacked the rim with ferocity, Noah Vonleh hit 3-pointers and they were able to slow down the penetration of the Warriors. It helped that Curry missed some 3-pointers but he still shot over 50 percent from long range.

The Blazers had success switching pick and rolls and we saw tons of weird line-ups. Noah Vonleh got extended run even playing some center. The Blazers also went with Aminu at center at times against the Warriors when they slide Green to center. It was a fascinating game from a match-ups perspective because few teams attempt to match-up with the Warriors let alone beat them while doing so. I suspect that although we’ve seen very little of Moe Harkless lately that he will play a lot in this game.

Meyers Leonard has been shooting the ball well, does he get a shot at center? Given the quickness of the Warriors, I’m not so sure. The key for Portland is to sustain the early blows that the Warriors will deliver. If Portland doesn’t hit back in the early going, the game could be out of their hands before they have a chance. However, the Golden State bench will likely give the Blazers an opening to get back into the game. The Blazers bench also needs to hold up its end of the deal if the Blazers are to have a chance.