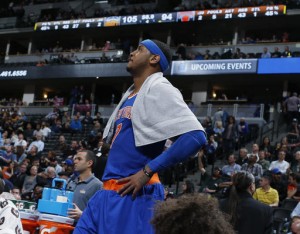 New York Knicks forward Carmelo Anthony looks on as time runs out in the second half of an NBA basketball game against the Denver Nuggets, Tuesday, March 8, 2016, in Denver. The Nuggets won 110-94. (AP Photo/David Zalubowski)