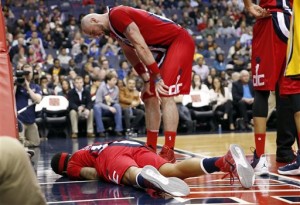 Washington Wizards center Marcin Gortat, center, from Poland, bends over to check on guard Bradley Beal who was injured during the second half of an NBA basketball game against the Indiana Pacers, Saturday, March 5, 2016, in Washington. Beal left the game. The Pacers won 100-99. (AP Photo/Alex Brandon)