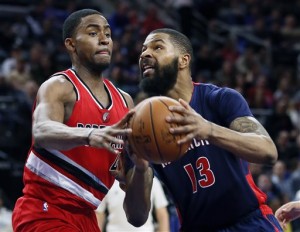 Detroit Pistons Marcus Morris (13) goes to the basket against Portland Trail Blazers’ Maurice Harkless (4) during the first half of an NBA basketball game on Sunday, March 6, 2016, in Auburn Hills, Mich. (AP Photo/Duane Burleson)