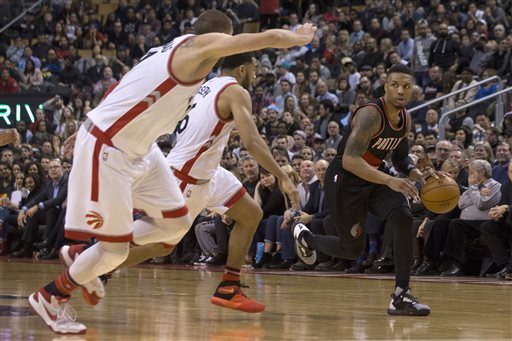 The Portland Trail Blazers have earned all the attention they’ve gotten as of late. For Damian Lillard, that goes double. Friday night in Toronto he doubled his number of career 50-point outings, with his second 50-point game in the past two weeks. However, thanks to DeMar DeRozan’s 38 points and 35 fouls as a team by the Blazers, Lillard and co. lost, 117-115.

While his second 50-point outing in the last two weeks deserves all the attention it will get, the Blazers have slipped a little bit defensively after righting the ship. Lillard’s explosion would have provided for another great story had the Blazers gotten a stop down the stretch.

It isn’t an alarming trend and it’s too early to even call it a trend. Their defense was a major reason for they’ve made a leap in the standings. However, it has slipped a little bit after being at a top-five level in the 15 games before the All-Star break. In the nine games since the All-Star break, the Blazers are ranked 19th

After handling the struggling Chicago Bulls, the Blazers have posted a defensive rating of 108.2 in the following four games.

Their last two games skew that number quite a bit having played two Top-10 offenses and they’ve played better teams since the break. Still, if the Blazers want to be a top-15 defensive team by season’s end, which is their stated goal, they have to start bothering teams who are expected to perform well.

Lillard wouldn’t let the Blazers fade even though the Raptors led for most of the game.He scored 22 points in the final seven-plus minutes to bring the Blazers to within two points but the Blazers never got the stops they needed to make it happen.

The Blazers were incensed with the officiating all night. Their reactions and interactions with the refs said as much. Their 35 fouls on Friday were the second most they’ve committed in a game this season, trailing only the hack-a obscenity of Nov. 30 when DeAndre Jordan shot 34 free-throws. It was called tighter than most games, but the Blazers are also a pretty foul-happy bunch.

It started early. Mason Plumlee picked up two fouls in the first four minutes. Meyers Leonard was called earlier than normal and was paired with Noah Vonleh, a pair that rarely has seen the floor.

Lillard, too, got going early.

Stotts would end up switching the starting line-up due to Plumlee’s continued foul trouble. Leonard got the start alongside Vonleh. Plumlee picked up his fourth foul before halftime yet somehow managed to play 26 minutes and close the game for the Blazers. If Leonard had any shots go down, perhaps this changes things, but the Raptors also didn’t let him have a ton of open looks.

Again, they allowed the Raptors to start the game with a 30-point quarter. The Raptors scored 27 points or more in every quarter.

Lillard helped bring the Blazers back and CJ McCollum was good for the entire game, but it they needed better defense to get the win.

Patrick Patterson hit a huge 3-pointer down the stretch and Jonas Valanciunas had two big offensive rebounds that led to Raptors buckets in the final two minutes.