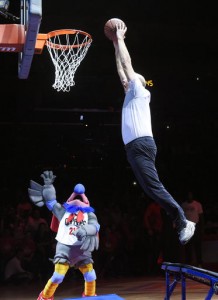 Los Angeles Clippers owner Steve Ballmer dunks a basketball after introducing their new mascot, a California Condor named Chuck, below, during halftime of an NBA basketball game between the Clippers and the Brooklyn Nets, Monday, Feb. 29, 2016, in Los Angeles. (AP Photo/Mark J. Terrill)