The Scouting Report: at Boston Celtics 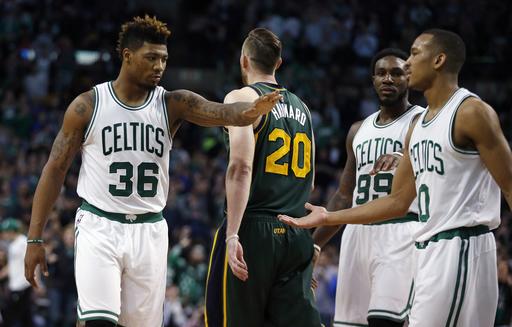 The Boston Celtics have also been one of the best stories in the NBA, much like the Blazers, but they’ve been planning this arrival for a few years now. They smartly changed course by trading Kevin Garnett and Paul Pierce a few years ago, then they got a king’s ransom from the Dallas Mavericks for Rajon Rondo. While the Blazers have been a surprise, the Celtics are more or less where they’re expected. It’s probably more surprising that these two teams haven’t played until now.

They have a better record than the Blazers in part to the fact that they’ve had a lot more roster continuity. They also had an excellent finish to last season, a season in which they underwent a lot of changes, but formed the core of their team. They acquired Isaiah Thomas which finally gave them the offensive fulcrum they needed to make them go. Jae Crowder, who was acquired in the Rondo trade, developed into a do-it-all forward who can guard all positions and knock down shots. He’s a solid 3-point shooter but also a pretty solid midrange shooter.

And they’ve also acquired a group of guards and players up and down the roster that just know how to fight. Marcus Smart battles all night and Avery Bradley may be the best perimeter defender in the league at the guard position. I guess we will see who is better between the Celtics guard and Kentavious Caldwell-Pope who the Blazers will face on Sunday in Detroit.

Anyway, the Celtics have a lot of guys that just won’t give up on a game. They’re much like the Blazers in this way that they’re a bunch of young guys who you can never tell “it’s over.” Jared Sullinger is probably too short to play center but yet he fights with players much taller and guards much quicker, somehow getting the job done. He did quite the job in switching situations against the Jazz in crunch time the other night.

This game should be a dandy. Brad Stevens may already be the NBA’s best head coach but Terry Stotts has a case for Coach of the Year, too. And both are coming off being named Coach of the Month in their respective conferences.

The Celtics go small late in the game so it will be very interesting to see how the Blazers answer that. One would think the Blazers throw Crabbe in there, slide Aminu to power forward and roll with whichever big man is playing the best. But Stotts hasn’t been one to do the predictable often.

Whatever the combinations, this game should be a dandy. The Blazers, especially their guards, should expect to meet a lot more resistance than they did Tuesday against the Knicks.