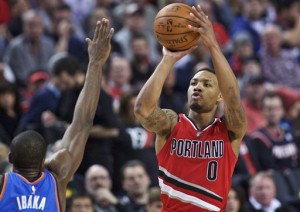 FILE – In this Sunday, Jan. 10, 2016 file photo, Portland Trail Blazers guard Damian Lillard shoots over Oklahoma City Thunder forward Serge Ibaka during the second half of an NBA basketball game in Portland, Ore. At the All-Star break, the Blazers are at .500 (27-27) and surprisingly sit in seventh place in the standings. Lillard, the fourth-year point guard is averaging 24.3 points and 7.3 assists per games, and is the only player that ranks in the leagues top six in both categories. (AP Photo/Craig Mitchelldyer, File)