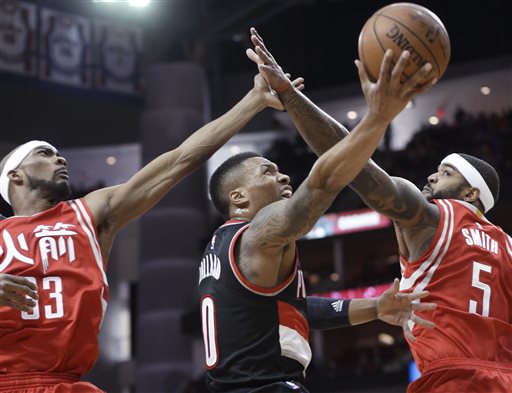 The ways that the seasons have gone for the Houston Rockets and Portland Trail Blazers couldn’t be anymore different, despite their records showing otherwise. And on Saturday afternoon, the Blazers showed that records are not everything and that they’re trending in a much better direction than their opponents.

The Blazers whooped the Rockets en route to a 96-79 victory in Houston without starting power forward Noah Vonleh and 6th Man of The Year candidate Allen Crabbe, out with injury (left ankle sprain) and illness (gastritis) respectively. The game wasn’t even that close as the Blazers led by as many as 32 points in the third quarter and the boo birds in Houston came out long before that.

Damian Lillard had 21 points and 10 assists and CJ McCollum pitched in 16 but the Blazers had six players in double-figures. On the other side, James Harden put up 33 points and eight rebounds of pure puff and also had 10 turnovers. Dwight Howard had a dispiriting 17 points. Houston, you definitely have a problem.

This game started in the way that most expected. Lots of offense, very little defense and turnovers from all around. Two of the top-ten offenses and two below-average defenses were facing off, points were expected and defense was not. Both teams delivered and things were even chippy, just like things often are when these two teams play. Patrick Beverley tried to physically bother Lillard just like old times.

The Blazers bench then extended the lead behind some excellent play from Gerald Henderson and the usual excellence of CJ McCollum. McCollum cooked the terrible Rockets defense off the dribble, but he wasn’t the only one. Meyers Leonard found open spaces after the Rockets closed out on him and Tim Frazier delivered solid minutes as he got the call. Leonard had some very nice plays when the Rockets tried to close him out at the 3-point line like this one. If he can consistently make plays like this when he gets run out of his shot, watch out.

Frazier looked like a much more playable contributor than Ty Lawson at this point in his career and he outplayed him on that end.

Moe Harkless hit two 3-pointers very early on in his second game as a starter and scored in double-figures before halftime. Gerald Henderson had 10 points at halftime as well and the Blazers had exceptional scoring balance despite not having one of their key contributors in Crabbe. Harkless finished with 14 points in 30 minutes of action in his second start in a row.

The Rockets haven’t managed to play passable defense since the start of the season and Saturday was no different. The Blazers, rightfully, believe that they are a better team than the last time they went to Houston back in November. Meanwhile, the Rockets continue to wither as a unit defensively while Harden is tasked with doing the work on almost every offensive possession.

The Blazers exploited the one-dimensionality of the Rockets offensively even though Harden got his numbers. The Blazers were opportunistic on defense, forcing 23 turnovers to just 13 Rockets assists. It was an all-around terrible performance for the Rockets and a feather in the cap for the Blazers, who beat up on a team ahead of them in the standings on the road. Both of those things have been hard for the Blazers this season.

I guess we’ll see if Houston can make any progress in resembling the team they once were. But if I were a betting man, I wouldn’t like their chances when they close out the pre-All-Star stretch of the season on Wednesday when they come to Portland. The trade rumors swirling about Dwight Howard aren’t helping. But a lot of that also has to do with the way Portland’s play has been trending over the past few weeks.

For the Blazers, they head to Memphis to face the improved Grizzlies on Monday before coming back home to play the Rockets one more time. The Grizzlies beat up on the Blazers last month in Portland. A win for Portland would even the season series against Memphis.