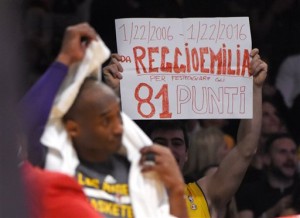 Los Angeles Lakers forward Kobe Bryant stands in front of the bench during the first half of an NBA basketball game against the San Antonio Spurs. as a fan holds up a sign in Italian marking the 10-year anniversary of Bryant scoring 81 points in a game, Friday, Jan. 22, 2016, in Los Angeles. (AP Photo/Mark J. Terrill)