Blazers bounce back with comfortable win over Wizards 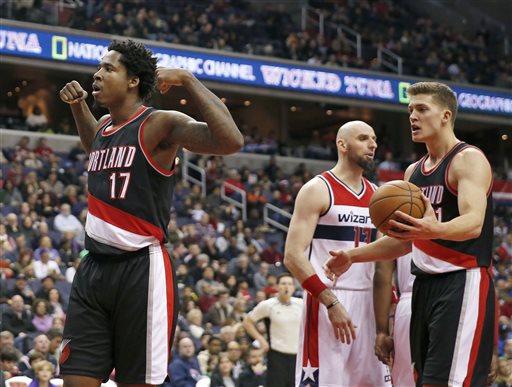 The Blazers quickly put their 25-point embarrassment of a loss to Philadelphia behind them in Monday’s game against the Wizards. The Blazers had a few bumps but ultimately coasted to victory 108-98 to finish their three-game Eastern Conference road trip.

The Wizards are getting closer to full strength but after probably their worst defensive performance of the season, the Blazers showed a different level of execution and attention to detail on the defensive end which propelled them to a win Monday.

The Wizards primary means of success is the pick and roll with John Wall and the Blazers did an excellent job of slowing down that aspect of Washington’s attack. Wall dished a handful of assists but the Blazers held him without a basket for the first quarter and kept him from getting to the rim where he is a good finisher and he is able to kick the ball out to corner 3-point shooters. Wall finished with nine points on 4-of-17 shooting and 10 assists.

Offensively they were also better with Lillard and McCollum shaking off their poor games on Saturday very early. McCollum scored eight of his 25 points in the 1st quarter and Lillard was aggressive, if not efficient, with six points. Allen Crabbe, the other guard with a scoring punch on the Blazers, would not be left alone in the scoring party.

Crabbe finished with 14 and Lillard with 16 points and six assists. Mason Plumlee came three assists shy of a triple-double with 10 points, 11 rebounds and seven assists.

The Blazers bench got into it in the second quarter, taking advantage of the Wizards bench. The Blazers led by as much as 14 points with Meyers Leonard catching fire from the outside. Portland’s bench had it going, but Leonard has having a field day against Washington’s shaky defense with 10 points in the first half. Gerald Henderson also pitched in with seven points off the bench.

But the Blazers defense, which was so strong in the first 12 minutes, were put on skates by the Wizards in the second quarter.

Wall got going in transition and Wizards were just beating Blazers players down the court. On the final Wizards possession of the half, Damian Lillard made a crucial mistake that led to an open Bradley Beal 3-pointer. While his job is normally to crash down on the roll man, which is what he did, but knowing personnel and Beal’s reputation as a shooter, he probably should have been a little closer as to not allow a wide open look. Gortat had been hurting the Blazers, but 3 is greater than 2.

The end result was that a game the Blazers dominated became a nip-tuck affair and a half where they shot 50 percent from the field and from the 3-point line was barely a net positive.

Portland’s answer to start the third quarter put the game in their favor for good. Their starters picked up where they left off at the start of the game by blowing by the Wizards starting unit. After the Wizards briefly took a one point lead in the 3rd quarter, the Blazers took over the game and took a 10-point lead after an Al-Farouq Aminu 3-pointer in transition. The Blazers kept the ball rolling from there and the Wizards very quickly looked discouraged.

The Wizards season has been one of unmet expectations and Monday night continued in that theme. The Wizards second unit was in shambles defensively and their match-up choice by always sticking a center on Meyers Leonard, was clearly the wrong way to play the big man who had one of his better games this season. Leonard had 18 points and was a match-up problem for the Wizards all night as they never found an answer to slowing him down. If they switched smaller players on him, he did a good job of using his size to his advantage and Ed Davis found him several times for buckets.

It helps when McCollum, Lillard and Crabbe have it going in the way that they all did. When those three guys can score, it opens up so many things for the Blazers as a collective. Tonight, it was Leonard who stepped up but also Plumlee, who had a near triple-double and was effective as a creator in 3-on-2 situations after the Wizards trapped Portland’s ball-handlers in pick and rolls.

The Blazers end their road trip 2-1 and have won four out of five games.