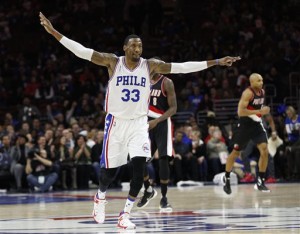 Philadelphia 76ers’ Robert Covington reacts to his 3-point shot during the first half of an NBA basketball game against the Portland Trail Blazers, Saturday, Jan. 16, 2016, in Philadelphia. (AP Photo/Chris Szagola)