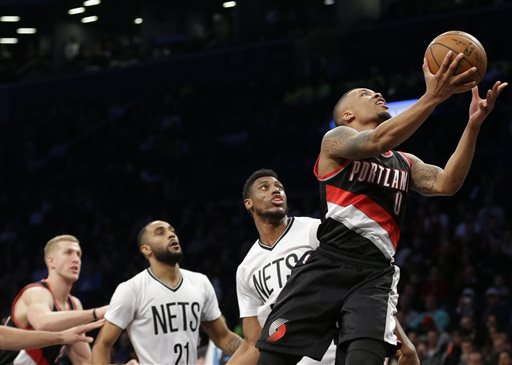 The Portland Trail Blazers won their third consecutive game and Damian Lillard pitched another gem in Friday night’s 116-104 win over the Brooklyn Nets. Lillard had 33 points, 10 assists, and no turnovers, which is the first time anybody has had such a game this season. It follows Lillard’s excellent stretch of play which began when he scored 40 points and 10 assists against the Warriors a week ago.

Lillard’s accomplice CJ McCollum didn’t have a good night from the field but dished seven assists and Allen Crabbe supplied the Blazers with enough shot-making down the stretch, finishing with 19 points. The Nets got off to an excellent start, fueled by the play of Brook Lopez. Lopez has hurt the Blazers when he’s healthy and got going early with eight points in the first quarter. He would finish with 25 points as he slowed down later on in the game while the Blazers got better.

The game flowed in a way that seemed to favor the Blazers, but a third quarter where the Nets caught fire from deep kept them in the game. Joe Johnson was briefly having a throwback game and then reality caught up with the Nets, who are now back in the desperate reality of their hopeless situation after getting a feel-good win over the Knicks earlier in the week.

The point guard advantage for the Blazers played out as expected with Lillard scoring five points and dishing five assists in the first quarter. But Lopez and the play of Thaddeus Young kept the Nets in front as the way the Blazers dominated the perimeter didn’t get them ahead, at least not immediately.

Crabbe found holes in the Nets defense by moving off the ball, which the Blazers ball movement was able to take advantage of. Crabbe hit three 3-pointers very early on in his stint on the court and almost all of them were wide open. Lillard and McCollum were able to break down the Nets defense easier than usual and it resulted in wide open look after wide open look in the second quarter. Ed Davis, Meyers Leonard and Moe Harkless all made significant contributions during this run.

The Blazers pushed their lead to as high as 12 in the second with everyone who came off the bench playing a part in the run. It was an impressive display by the Blazers but equally so for the Nets, being impressive through their ineptitude defensively. And towards the end of the quarter, Lillard closed. He finished with 13 points and five assists in the first half and appeared to get into it a little bit with Donald Sloan at the end of the half. Lopez exploited the Blazers poor interior defense, whether it was Plumlee or Leonard. Plumlee was much more aggressive looking for his shot against his former team but he didn’t really score. Portland’s most effective big man tonight was Ed Davis who exploited holes in the Nets second unit and was nearly perfect, going 6-for-6 from the field and finishing with 14 points and 10 rebounds in 24 minutes.

McCollum played well but had a rough shooting night, which he’s had a few of lately after putting the team on his back with Lillard out. That should come back around soon. But right now Lillard has been returning the favor. Over the last five games Lillard is averaging 29 points and 9.6 assists per game.

The Blazers will have another drastic point guard advantage tomorrow night when they take on the Sixers. And while the Nets are not a good team, the Blazers withstood their runs and stuck with the things that got them the lead in the first place. If nothing else, it was a nice road win, helping them improve to 8-15 on the road this season.