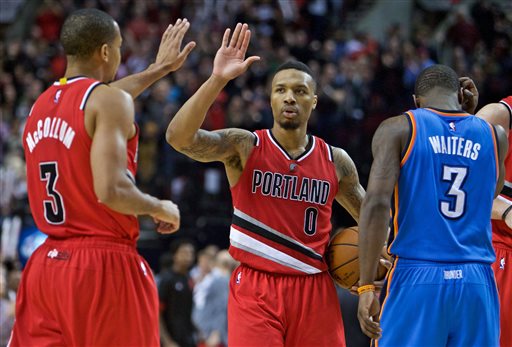 The Portland Trail Blazers crossed the halfway point in the season after last night’s win over the Utah Jazz. We’re back with another episode of the Blazer Banter podcast which tries to shed light on Blazers stories in audio form. Last weekend we were fortunate to get some semi-exclusive time with Damian Lillard and get his take on the Blazers at midseason. His comments were also in Wednesday’s report on the Blazers at the preseason.

The other topics covered in the podcast includes Portland’s poor defense and the things that they have to do better on that end. I also briefly touched on the line-up debacle last week involving CJ McCollum resulting in his surprise inactive against the Los Angeles Clippers.

You can subscribe to the Blazer Banter podcast on iTunes so that you can get it directly on your phone as soon as we upload it. Please leave us a review if you listen to us on iTunes. The podcast is also hosted on The Columbian’s SoundCloud page. Look for “thecolumbian” on SoundCloud and follow us there or you can listen/download directly from our blog.

As I stated at the end of the podcast, we’re hoping to have another podcast next week which will go along with our Monday feature.

Also, if you want to listen to my other podcast, which is more of a traditional conversational format, check out the Bulls vs. Blazers NBA podcast with myself and Sean Highkin of Bleacher-Report and NBC’s Pro Basketball Talk.