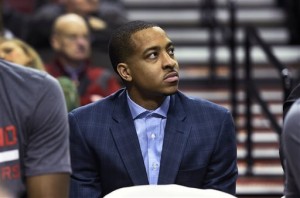 Portland Trail Blazers guard C.J. McCollum sits on the bench during the second half of an NBA basketball game against the Los Angeles Clippers in Portland, Ore., Wednesday, Jan. 6, 2016. McCollum was inadvertently left off the roster and did not play in the game. The Clippers won 109-98. (AP Photo/Steve Dykes)