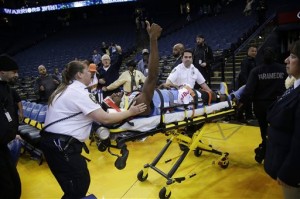 Denver Nuggets forward Kenneth Faried is taken off the court on a stretcher after an injury at the end of an NBA basketball game against the Golden State Warriors on Saturday, Jan. 2, 2016, in Oakland, Calif. (AP Photo/Marcio Jose Sanchez)