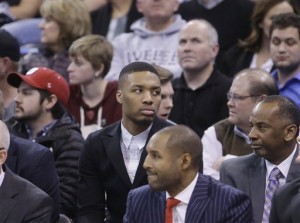 Portland Trail Blazers guard Damian Lillard, center, looks on as he sits on the bench during the second quarter of an NBA basketball game against the Utah Jazz Thursday, Dec. 31, 2015, in Salt Lake City. (AP Photo/Rick Bowmer)