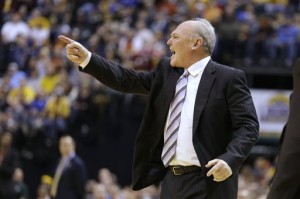 Sacramento Kings coach George Karl yells at officials during the first half of an NBA basketball game against the Indiana Pacers in Indianapolis, Wednesday, Dec. 23, 2015. Karl received a technical foul on the exchange. (AP Photo/Michael Conroy)