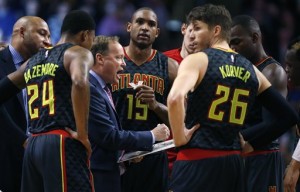 Atlanta Hawks head coach Mike Budenholzer, third from left, talks to his team during the fourth quarter of an NBA basketball game against the Boston Celtics in Boston, Friday, Dec. 18, 2015. The Hawks won 109-101. (AP Photo/Michael Dwyer)