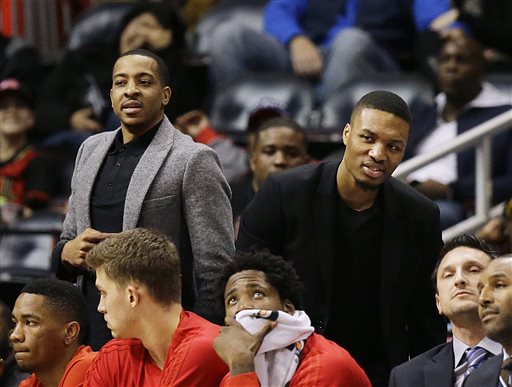 The Portland Trail Blazers, battered and beaten, won’t have to dream about being home for Christmas much longer, at least. And if Damian Lillard and CJ McCollum miss more time, dreams about winning may linger.

The Atlanta Hawks took care of a short-handed Portland Trail Blazers team 106-97 Monday in Atlanta. It was Portland’s fourth straight loss, all of which have come on this five game road trip the Blazers which ends Wednesday in New Orleans.

Without their two best players against a team that won 60 games the season before, the odds were not in Portland’s favor. Any night where they don’t have even one of Lillard or McCollum they are a good bet to get blown out. So missing both players, the expectations would be extremely low.

Mason Plumlee played a complete game while playing with minimal mistakes and a near triple double of 11 points, 10 rebounds and 6 assists.  Allen Crabbe got to show what he can do in an increased role, getting better at the end. Tim Frazier showed why it’s good to invest in a point guard that will get teammates involved and promote team ball at all costs. Crabbe was the best scoring threat on the court but Frazier dominated the ball, helping set up his teammates.

Balance and trust in the system is Portland’s best friend in a lot of situations but it’s especially the case when they’re without Lillard or McCollum. Frazier went the distance, save for 25 seconds at the end of the first half, despite picking up his third foul with four minutes left in the first half. The Blazers had huge holes to fill and Frazier was everywhere at once trying to plug them up. He was aggressive on the glass, in the right place defensively and he got Portland’s offense moving. Frazier had a great all around game, despite not shooting well from the field, 15 points, seven rebounds and seven assists. He was the force that drove Portland offensively and he played with energy on the defensive end.

The Hawks are a team of balance by construction and instruction. The Blazers had to be on their toes against their ball movement and player movement. But the Blazers did well to stick with the Hawks in terms of effort and confidence, playing like they were in the same league as Atlanta. But Atlanta soon proved that the shorthanded Blazers were no match for them and their offensive balance.

The Hawks pulled away at the end of the first half. That was the the same time that the Blazers found it harder to get shots after a rare flurry of points by Moe Harkless in the middle of the second quarter. Harkless scored 12 straight points at one point in the second quarter with a pair of 3-pointers punctuated by an alley-oop dunk. Harkless had Portland’s only two 3-point field goals in the first half as their ball movement couldn’t get the ball in the basket.

Crabbe didn’t have as good of a night as the Blazers would have needed him to to pull off the upset, at least early. He did his thing, but the Blazers needed a little more than normal out of what they expect from Crabbe on a nightly basis. He exploded in the fourth quarter and was part of a Blazers rally that got the score from blowout to a respectable score. Crabbe still ended the night with career-high, finally breaking the 18-point mark which he’d gotten to three other times this season.

That’s what the Blazers had to settle for tonight. The Hawks dominated for most of the game and the Blazers young, inexperienced bunch made enough plays to at least make Atlanta keep their starters in through until the end of the game.

Ed Davis was efficient and Meyers Leonard also appeared to have more confidence in his shot though he went 2-for-7 and didn’t make a 3-pointer. He’s a much more effective player, even if he misses, when he shoots with confidence. Al-Farouq Aminu hit few shots and was more or less ineffective offensively, which he usually is when he’s asked to do things other than catch and shoot. Gerald Henderson was able to get his shot off, which was something the Blazers needed without McCollum or Lillard but he wasn’t able to shoot efficiently to really take advantage of the extra opportunities.

The Blazers outplayed the Hawks in basically every area except shooting and again, turnovers. The Blazers had 19 turnover and had just five 3-pointers on the night.

The Blazers wrap up the road trip Wednesday in New Orleans against the lowly whom the Blazers have defeated twice this season.