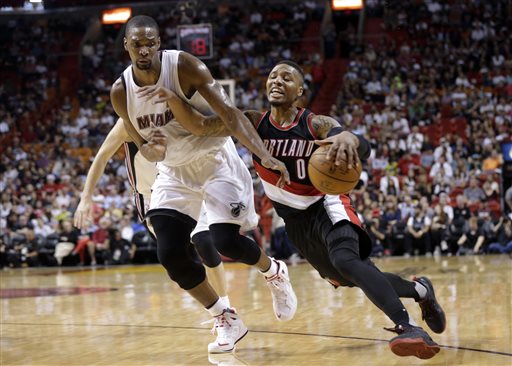 The Portland Trail Blazers looked more like the team they’ve been for most of the 2015-16 season in Sunday’s 116-109 loss to the Miami Heat. Damian Lillard had a huge game, finishing with 32 points and nine assists but ultimately the Blazers coughed up 10-point halftime lead and a four-point lead after three quarters to the veteran Heat.

Chris Bosh led the Heat with 29 points but Dwyane Wade, Hassan Whiteside and Gerald Green all made big plays late.

The Blazers started off this game well with Al-Farouq Aminu continuing the hot shooting he ended the Orlando loss with. Aminu hit two 3-pointers in the last few minutes of the Orlando loss and then hit four 3-pointers in the first half against the Heat and hit one very early on. Aminu and CJ McCollum got most of the scoring while Lillard settled into facilitator role early before being more aggressive as the game progressed.

Chris Bosh was causing problems for the Blazers defensively. Noah Vonleh did as good of a job as any Blazer did in guarding Bosh but he picked up some cheap fouls and his role is still so limited that he wasn’t going to stay on him for a long part of the game. Ed Davis had him late in the game when he started to go off and the Heat re-took the lead once again. But this game was one of 16 lead changes and a real Sunday NBA treat.

Lillard was fantastic for the entire game and had one of his more efficient outings going 10-for-18 from the field. Aminu’s 3-point shooting is always a major boost to the offense and perhaps that helped ease the burden offensively. McCollum was aggressive in the early going, torching Wade and quickly forcing the Heat to put 6-foot-9 Luol Deng on him.

Portland was once again plagued by turnovers. They had 12 in the first half and it seemed like the Heat made an adjustment to attack passing lanes and ball handlers more aggressively in hopes of getting turnovers. The Blazers were getting shots if they got there. But the process to get them was murky and has been quite a lot during this season. Lillard has been an All-Star in my estimation, but there’s no ignoring a spike in turnovers this season with jump in usage. As I wrote in the scouting report, if this game was close, the Heat would have the major advantage. Wade hadn’t played well but elevated his game in the final few moments, completing a nice 18-point, seven assist performance. Hassan Whiteside made the Blazers pay for going small by getting key offensive rebounds and putbacks to hurt the Blazers even on the times they got Miami to miss. Whiteside had a couple of buckets thanks to nice passes from Wade. The Blazers dominated the Heat on the boards for the game, but Whiteside got rebounds at key moments to help Miami pull away.

Gerald Green–no stranger to tough shots–hit a pair of high pressure corner 3-pointers in the fourth quarter, all part of a big night for him off the Miami bench. The Blazers bench had an uneven night. Allen Crabbe played solid defense but didn’t hit a 3-pointer. But Meyers Leonard hit a couple of 3-pointers and seemed to play with less hesitation early on. Though there were other times in the game it seemed that he turned down shots or the Blazers didn’t look to get him the ball.

On one possession in the 3rd quarter, Leonard had Gerald Green guarding him on the block and while he had position, never got a touch. Leonard hasn’t been a great post player over the course of his career, but according to Synergy data on NBA.com Leonard is averaging 1.20 points per possession on post-ups. Leonard has recorded only 15 such possessions, but this being a season of development, the Blazers need to get him more touches when he posts up, which is almost always against smaller players switching on to him. They have to do it to see if that part of his game is sustainable and it would also serve them to find other ways to find points off the bench.

Lillard looked to re-injure an ankle he turned on Wednesday against Oklahoma City and was visibly hobbling after the game. McCollum, too, seemed bothered by an injury after Wade under cut him from the blindside on a drive. They’ll both likely try to play Monday but the second game of a back-to-back against a good Atlanta team won’t be a good way to ease their way back to health. Casey Holdahl of TrailBlazers.com tweeted that Lillard is dealing with plantar fascia issue, not an ankle or knee issue but that it’s not expected to cause Lillard to miss Monday’s game against Atlanta.