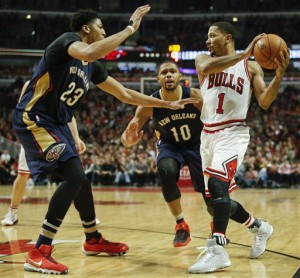 Chicago Bulls guard Derrick Rose (1) looks to pass the ball against the defense by New Orleans Pelicans forward Anthony Davis (23) and guard Eric Gordon (10) during the second half of an NBA basketball game, Saturday, Dec. 12, 2015, in Chicago. The Bulls won 98-94. (AP Photo/Kamil Krzaczynski)