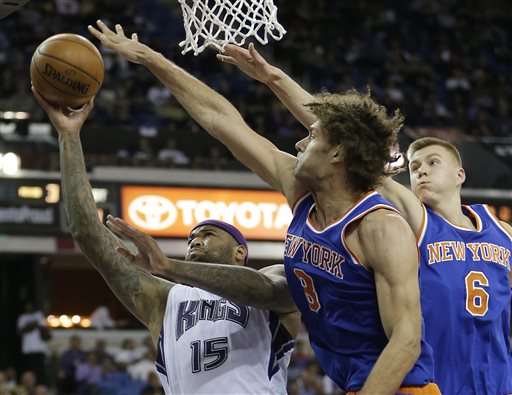 After a year of injuries and tanking in their first year of the Phil Jackson regime, the Knicks are bringing excitement back to their fans in year 2 of the rebuild. But the biggest reason for excitement this season has been the play of rookie Kristaps Porzingis.

Porzingis has a chance to become the first rookie to play in the NBA All-Star game since Blake Griffin did it in 2011. And all of the hype for Porzingis has been warranted. He can handle the ball out of pick and rolls, he can pass, he can shoot from long-range, he’s a strong rebounder and a shot-blocker. He’s averaging just a hair under 2 blocks per game, 14 points and 8.6 rebounds per night. Whomever is guarding Porzingis–whether it’s bigs or Portland’s guards picking him up on switches–must also watch him when the ball is out of his hands for offensive boards. This skill of his has been so easy to notice the NBA even made a compilations of his putbacks.

He almost pulled off the move against the Kings late in the game to tie the game, so even in crunch time the Blazers will have to keep tabs on him away from the ball.

The Blazers have their hands full on the defensive glass tonight. I don’t have to tell you all about how much of a threat Robin Lopez can be on the glass. It’s one of his better skills and he’s excellent at boxing out his man. But Carmelo Anthony is also a very good rebounder in his own right. The Knicks are a solid offensive rebounding team but their starting frontcourt is a formidable rebounding unit.

Al-Farouq Aminu will have his hands full with Anthony. Although all of the press has been about Porzingis and his franchise-changing performance, Anthony is still one of the NBA’s elite scorers. He played through a knee injury for much of the season last year in order to be eligible for the All-Star game and was immediately shut down afterwards. His thunder has been stolen to an extent, but he will still be Portland’s No. 1 priority defensively.

Arron Afflalo is going to try and post-up CJ McCollum and will get a lot of midrange shots. Jose Calderon is slow and the oldest point guard in the league, so I’m sure Damian Lillard is licking his chops. Lillard and McCollum don’t allow someone to “hide” on them, which will be problems for the New York backcourt.