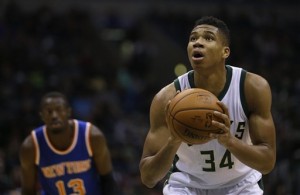 Milwaukee Bucks’ Giannis Antetokounmpo shoots a free throw during the second half of an NBA basketball game against the New York Knicks Saturday, Dec. 5, 2015, in Milwaukee. The Bucks won 106-91. (AP Photo/Aaron Gash)