Blazers blow another lead late in 90-88 loss to Bucks 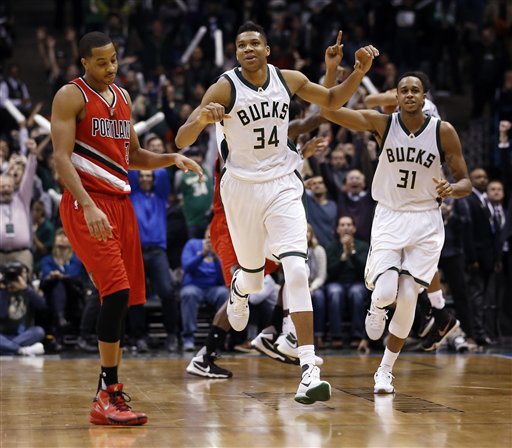 Here we are again after another late-game collapse by the Portland Trail Blazers. This one in record time, losing a 4-point lead in the final 22 seconds to lose to the Milwaukee Bucks 90-88. In two possessions, the Blazers went from a no-worse than .500 road-trip and another comeback win under their belt to another in a string of “woulda, coulda, shouda” games.

The first was with 16 seconds left when the Bucks went to their trusty (at least under Jason Kidd) post-entry-in-bounds-pass-which-is-just-a-decoy-to–get–a–3-pointer play. Sorry I don’t know what they call it but I watched a lot of Bucks games last year and saw them run this through Jared Dudley for Khris Middleton 3’s. Anyway, OJ Mayo with Middleton as the decoy to cut Portland’s lead to 1. It’s Milwaukee’s pet play for a reason and Mayo hit the shot over a great contest from Davis.

Then Portland ran a variation an inbounds play that worked for them to get fouled without issue on the last possession, but this time, there was a big problem. McCollum got trapped in the corner and Michael Carter-Williams forced a jumpball.

Greg Monroe made a bucket to give the Bucks a 1-point lead off a beautiful dish from Carter-Williams but left Portland enough time to get a shot. The Blazers exhausted their first options on the play, but Mason Plumlee found Meyers Leonard open above the foul line for the final shot which was swatted by Milwaukee’s John Henson.  Leonard caught the ball and went straight up, either out of haste or out waste, electing not to dribble or make a move before putting up the floater. The Blazers trailed by 14 points and came back to lead by as much as six when it was 81-75 in the fourth quarter.

Once again, the Blazers got off to a slow start. The Bucks, having been off for a few games, looked like the more energetic team and were forcing the Blazers to work much harder to get good shots. The Bucks trapping defense forced a lot of Blazers turnovers, which was compounded by a bad shooting night. Portland struggled when they put the ball on the floor and didn’t get the Bucks defense into multiple rotations.

The Bucks have had their own problems this year. Their defense has fallen off a cliff and their offense has struggled since they traded Brandon Knight to Phoenix. And as such, they gave the Blazers plenty of chances to get back into the game despite the fact Portland was playing so poorly early.

Unlike the last few games, the Blazers bench didn’t dominate their opponents. They didn’t play as poorly as the starters, but not well enough to tie the game up or even come close to taking the lead back. Portland led after the first basket of the game and once again at 4-3, but the Bucks went on a big run to build a double-digit lead.

The only success the Blazers had in the first half came when Terry Stotts went to a small line-up with Al-Farouq Aminu at power forward and Gerald Henderson at the three with Lillard, McCollum and Mason Plumlee. Portland cut the lead down to as low as five but went into halftime down nine. Down the stretch, Stotts went small again by going with Ed Davis at center alongside Aminu, Crabbe, Lillard and McCollum. That line-up outscored the Bucks by 3 in almost six minutes of play but obviously, it should have been more.

The Blazers have established a trend of starting slow recently. But they’ve also established one of starting fast in the second half of games over 22 games. The Blazers have one of the better 3rd quarter net-ratings in the NBA, out scoring opponents by 8.9 points per 100 possessions in the third quarter, which is 6th in the league per NBA.com. And once again, Portland’s starting line-up was much better after some halftime adjustments. But unlike the other night against Minnesota, they were ultimately outscored by 6 according to NBA.com.

Noah Vonleh had his way on the offensive glass and–gasp–the Blazers finally started hitting some 3-pointers after going 1-for-17 from the 3-point line in the first half. The extra possessions and made shots provided the lift that they needed as they were able to sustain the defense they’d played in the first half against Milwaukee’s stagnant offense.