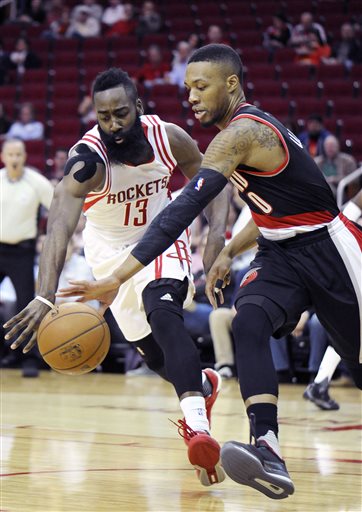 The Portland Trail Blazers blew a 15-point lead after three quarters to the Houston Rockets, eventually losing Wednesday in overtime 108-103. James Harden had 45 points, 11 assists and eight rebounds in the victory. The Rockets outscored the Blazers 47-27 to end the game.

What looked like a disaster for 3.98 quarters of basketball now represents a season-changing moment for the Rockets. And what looked like a get-right win before coming home is just another in a stream of losses. It was also another example that the Blazers have an issue closing teams out and holding onto leads.

Before we talk about this game, let’s put in detail just how bad the Blazers have been late in games through 13 games. After tonight, roughly 16 percent of the way through the season, the Blazers have posted a league-worst -15.5 net-rating in the 4th quarter according to NBA.com, which is the team’s point differential per 100 possessions. They have the 26th ranked effective field goal percentage in the 4th quarter and 26th in turnover percentage.

It also doesn’t help the Blazers that opponents have essentially cancelled Lillard Time. Wednesday was no different as Portland lacked that extra magic. Some of that is by design and some of it is Lillard not making shots.

Houston took the ball out of Lillard’s hands, doubling him with Dwight Howard and forcing Al-Farouq Aminu to make the shots to put them away, which he obviously didn’t do. Lillard–perhaps exhausted from the monstrous load he’s asked to carry–would stand at the top of the key during key possessions watching the clock go down. Lillard is shooting 25 percent so far in the 4th quarter and 20 percent from deep this season according to NBA.com. CJ McCollum has been the crunch time scorer for the Blazers this year. Lillard has clearly been Portland’s best player, but so far this season, he been able to give them that extra oomph in the fourth quarter.

All of that brings us to tonight, where the Blazers blew another big lead, in some ways mirroring the loss that started this streak against the Pistons where Portland allowed a 41-11 4th quarter at home.

The Blazers blew the lead, played sloppy with the ball, but did nearly everything right strategically down the stretch. They fouled up three and tried to do it a second time, but surrendered a running 30-footer, only to see Corey Brewer swish it and send the game to overtime with 0.9 seconds left.

Don’t let the final score fool you, Wednesday night’s game was terrible. Portland’s close to the game was the coup de grace on a night of awful basketball. The #Bazers greatest hits continues to be updated by the night.

It was expected that Wednesday night in Houston would be tough sledding for the Blazers. They were going up against the Rockets, a sexy title pick heading into the start of the season that fired their head coach Kevin McHale less than 12 hours before tip-off with last year’s runner-up in the MVP voting James Harden.

The Rockets came out with a lot of energy in the early going. Harden got an early steal and was dangerously close to a second on Lillard drive. Howard had a noticeable bounce in his step and was looking to make big plays on the Blazers. He nearly came down with a thunderous alley-oop dunk before Mason Plumlee jumped to tip the ball out of his hands.

Despite the early energy, Portland weathered the storm relatively well. Noah Vonleh was pulled early in the game despite getting the start. He fell asleep getting back in transition which led to a Rockets dunk and was almost instantly pulled out. Harden’s energy continued throughout the night.

Portland’s small second unit did an excellent job of taking the lead and building on it. Crabbe continues to step up off the Blazers bench, scoring 15 points on 6-of-12 shooting. McCollum took more of an active role in creating, helping the Blazers survive a less-than stellar shooting night from Lillard. McCollum finished with 19 points and six assists.

For as good as Houston was last year and we expected them to be even better this season. But the addition of Lawson hasn’t helped at all. In fact, the argument can easily be made that he’s hurt them on both ends. When the Rockets made their run in this game, they did so with him watching from the bench.

The Rockets didn’t really deserve to win this game. But sometimes in the NBA, one good quarter is all you need to change your narrative. They did that tonight. Portland, as has become the norm, has to wait another night to shake up theirs.