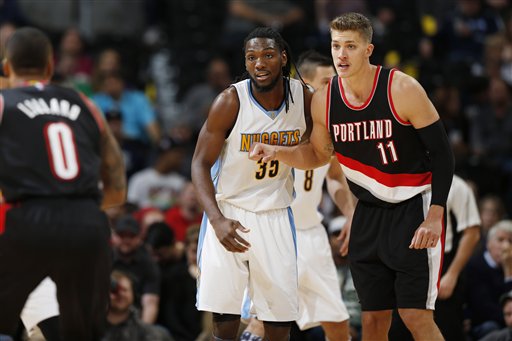 Portland Trail Blazers starting big man Meyers Leonard has been ruled out for the team’s game Friday against the Memphis Grizzlies at the FedEx Forum, the team announced Thursday.

Leonard dislocated the shoulder while fighting for rebounding position on a free-throw, leaving the game with just under five minutes left in the third quarter of Wednesday’s loss to the Spurs. There has been no official update from the Blazers on whether Leonard sustained ligament damage when he dislocated the shoulder. The team is calling the injury a shoulder dislocation.

His comments to reporters following the game sounded hopeful. But if Leonard tore his labrum, his season could be in jeopardy much like the injuries did in the case of Kevin Love and Michael-Kidd Gilchrist. However, we have seen players such as Dwight Howard and Carmelo Anthony still play despite suffering a torn labrum. Leonard is in a different part of his career than those latter examples.

An orthopedic surgeon told Jason Quick of CSNNW.com that Leonard could miss more than a month after the dislocation.

Leonard had seven points, five rebounds and two assists in 24 minutes while guarding LaMarcus Aldridge for most of his return to the Moda Center.

Leonard was averaging 8.6 points, 4.4 rebounds and 1.6 assists per game coming in to Wednesday’s game.

The Blazers trailed the Spurs 81-75 after three quarters.

Leonard didn’t return to play in the game but he did return to the bench wearing an ice pack on his left shoulder to watch the duration of the game.

The Blazers start a four-game road trip Friday against the Grizzlies before heading to Charlotte, San Antonio and Houston.

Without Leonard in the line-up, it will be interesting to see who Stotts goes with. Will he go small at tip-off and slide Al-Farouq Aminu to power forward while inserting another wing like Allen Crabbe or Gerald Henderson? Does he start with the line-up of Mason Plumlee and Ed Davis which provides athleticism against Gasol and Randolph but very little spacing offensively? Could he start Noah Vonleh at power forward?

The Leonard injury will also mean more of an opportunity for undrafted rookie Cliff Alexander who has recovered from a bone bruise in his left knee. Stotts said Alexander was “asymptomatic” and that surgery has been shelved for now.