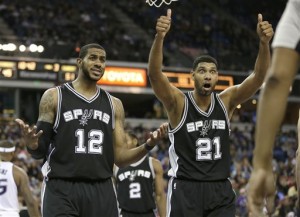 San Antonio Spurs’ LaMarcus Aldridge, left, and Tim Duncan, question official Bennie Adams after he called Aldridge for a foul during the second half of an NBA basketball game against the Sacramento Kings in Sacramento, Calif., Monday, Nov. 9, 2015. (AP Photo/Rich Pedroncelli)