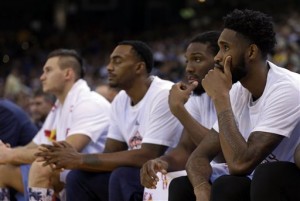 Denver Nuggets watch from the bench during the first half of an NBA basketball game against the Golden State Warriors Friday, Nov. 6, 2015, in Oakland, Calif.