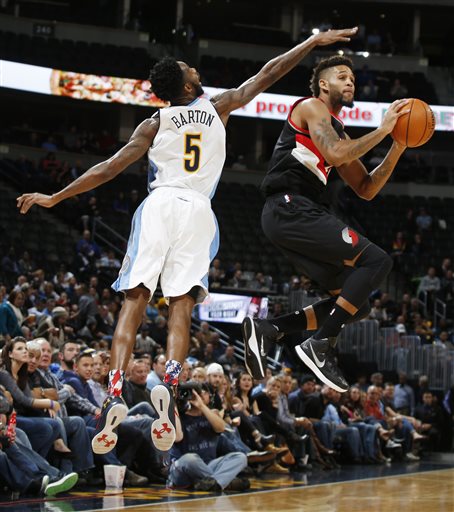 Some problems are becoming too big too ignore for the Portland Trail Blazers after another tough second half, losing their second straight game Tuesday to the Denver Nuggets 108-104. Damian Lillard had 30 points in the loss. Denver’s rookie point guard Emmanuel Mudiay had 18 points, six rebounds and five assists in the win for the Nuggets.

Over the first few games, Portland has shown an ability to score with the best of teams. They’ve even done a better job of getting back in transition defense. But their pick and roll defense still leaves a lot to be desired. Scoring guards are attacking the Blazers with success.

In addition to Mudiay, JJ Hickson had a double-double of 19 points and 13 rebounds off of rolls to the basket or going against smaller players on switches.

CJ McCollum scored 12 in the final period but it wasn’t enough to carry the Blazers to victory and hold on to the one-point lead they had going into the fourth. The Blazers took much better care of the ball but couldn’t buy a bucket, despite being given many chances by the Nuggets defense. Portland’s offense suffered bouts of standing around, but they also failed to cash in on opportunities to hit open shots, which they had plenty of late.

When they were down by four with 30 seconds left, Lillard got a wide-open look at a 3-pointer and missed. Hickson–a career 62 percent free-throw shooter–went 4-for-4 at the line in the last two minutes.

They showed no signs of fatigue early in the first quarter. Damian Lillard and Meyers Leonard rediscovered the success they had throughout most of Sunday’s game against the Pistons. Leonard connected on a couple of jumpers but he also helped move the ball to other players out of it. When Leonard plays with little hesitation and is a screen-settting/dribble-hand-off machine, good things happen.

The Nuggets second unit helped them briefly take control of the game. Allen Crabbe and Moe Harkless both chipped in on the offensive end but the tempo was allowing both teams to get good looks. Every Denver reserve made a basket in the second quarter, but Lillard eventually wrestled the game back in Portland’s favor.

Lillard scored 20 points or more for the 8th straight game. The Blazers led by just one at halftime as the Nuggets managed to keep it close by getting quality shots.

In the third, Denver outplayed the Blazers. At least for most of it. Lillard was kept quiet for much of the third period and as a result, so where the Blazers. Most of the shots they put up were bricks. But then in the final minute of the third, Lillard scored six consecutive points including a four-point play.

After a 7-0 mini-run by CJ McCollum, the Blazers took a 1 point lead with 8:29 left in the fourth quarter. That’s when Lillard came back into the game.

But Lillard’s re-entry into the game did not trigger an offensive surge. For the second consecutive night, the Blazers offense looked stagnant in the fourth quarter. The ball didn’t move the same way around the perimeter. The Leonard-Lillard pick and roll wasn’t bearing fruit and far too many possessions ended in contested jump shots.

With their jump shots not falling, Portland had to get back into the game with their defense. Al-Farouq Aminu had a strip of Danilo Gallinari which he took back for a score with 4:50 left to tie the game at 93.

The Blazers dropped another winnable game ahead of the highly anticipated return of LaMarcus Aldridge to the Moda Center in a San Antonio Spurs uniform.