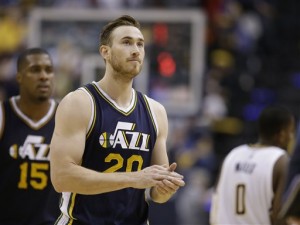 Utah Jazz’s Gordon Hayward in action during the second half of an NBA basketball game against the Indiana Pacers, Saturday, Oct. 31, 2015, in Indianapolis. The Jazz won the game 97-76. (AP Photo/Darron Cummings)