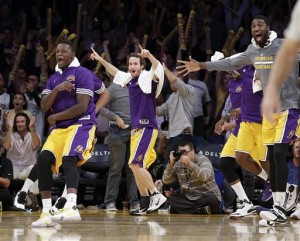 The Los Angeles Lakers bench reacts to a dunk made by Ryan Kelly during the second half of an NBA preseason basketball game against the Portland Trail Blazers, Monday, Oct. 19, 2015, in Los Angeles. The Lakers won 104-102. (AP Photo/Jae C. Hong)