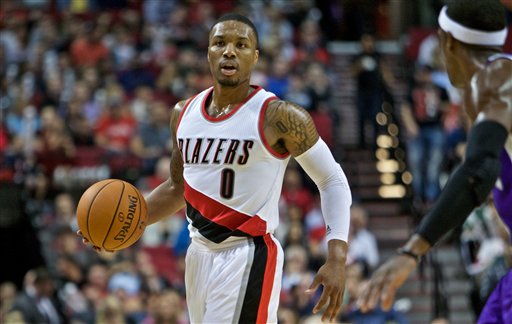 The Portland Trail Blazers have five days until their next preseason game. Last night, Monday, they defeated the Utah Jazz, 88-81, to move to 2-2 in the preseason.  They face those same Jazz this Sunday. Presumably, Damian Lillard–who has missed the last two games of the preseason with a minor ankle injury–will return from injury.

It’s still pretty quiet right now and there has been no update on a contract extension for Meyers Leonard, which can happen as late as November 2.

Mike Richman of The Oregonian explored a new line-up that the Blazers tested on Monday night, with their three best defensive wing players, Allen Crabbe, Al-Farouq Aminu and Moe Harkless in at the same time alongside Ed Davis and CJ McCollum.

“I played (power forward) a little bit when I was in Dallas and we kind of run a little similar stuff so it wasn’t impossible, but it was a challenge,” Aminu said following the 88-81 win.

The small ball look played the opening 6:32 of the third quarter and outscored the Jazz 13-11 during that stretch.

“It just takes some adjusting,” Blazers coach Terry Stotts said. “I thought they figured some things out and it’s something to build on.”

Meyers Leonard led the Blazers with 19 points in Monday’s win, but didn’t start the second half. As Richman brings up, the Blazers have lots of switching potential on defense with Crabbe, Aminu and Harkless in at the same time. Offense, on the other hand, may be a little more of a chore with that unit and Ed Davis on the floor. It would be interesting to see that small ball look with a shooter of Meyers Leonard’s caliber and Richman also pointed out they went to a look swapping Davis for Noah Vonleh. Stotts has a lot of new toys to play with and line-ups to look at.

Paul Flannery of SBNation.com did a long-form look at Blazers guard Damian Lillard, highlighting his new journey as Portland’s franchise player. Flannery looks at the qualities the Blazers found in him which stood out and shows that those same qualities led to adidas making him one of their most important basketball pitchmen.

Casey Holdahl of TrailBlazers.com put together a post showing the new Blazers-themed Stance socks. Stance became the official sock provider for the NBA and are making personalized team socks for every team to wear with their “alternate jerseys.” Holdahl reports that the team socks will be available for purchase at the end of October.

Starting this season, every @nba team will have two exclusive oncourt socks. Over the course of the next 30 days, we’ll unveil each squad’s socks. Here is your first look at the @trailblazers. #stancehoops #stancenba #theuncommonthread

Evans Clinchy of Blazersedge.com put together a compelling case for the Blazers offense to be better than most people think. After seeing the over-under from Las Vegas of 26.5 wins, I’ve been a pretty staunch supporter of the over bet. They don’t have a chance to win the division and their playoff odds are slim, but the amount of talent they have on offense may surprise people.

ESPN The Magazine ranked the Portland Trail Blazers 71st in their overall sports franchise rankings, dropping 38 spots from No. 33 at this time last year. These rankings are pretty arbitrary. The Blazers suffered a drop from the top-40 in ownership to 89th and a precipitous drop in coaching as well even though those two things were unchanged.