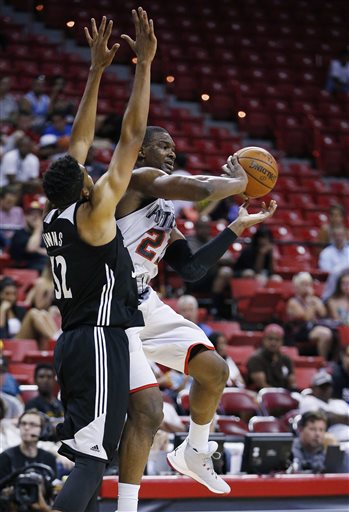 The 2015 NBA Summer League season wraps up Monday night with the championship game of the Las Vegas tournament between the Phoenix Suns and the San Antonio Spurs. On the eve of the final, the NBA announced the Las Vegas Summer League MVP as well as the First and Second All-Tournament teams.

Portland Trail Blazers forward Noah Vonleh was on the All-Summer League Second Team joined by Denver’s Emmanuel Mudiay. San Antonio’s Kyle Anderson was named MVP. Here is the rundown of both All-Tournament teams from the NBA.

Vonleh averaged 17.2 points, 8.5 rebounds and shot 5-of-10 from 3-point range in 29 minutes per game during the Blazers run in Las Vegas. Throughout the week, Vonleh was often the best player on the court for the Blazers. Portland had an abysmal Summer League opener while Vonleh was sidelined with an ankle injury. Portland looked noticeably better with Vonleh on the floor.

Not that summer league means a whole lot, but Vonleh did show good patience for a young player and knowledge of when to use the skills in his toolbox. His outside shooting, tight ball-handling and athleticism were all on display. He even played center at times.