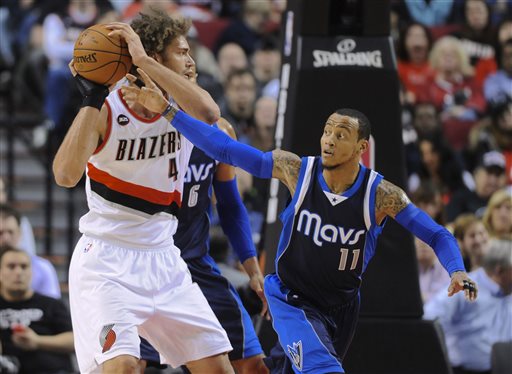 The Portland Trail Blazers have a lot of high-profile free-agents including All-Star LaMarcus Aldridge and shooting guard Wesley Matthews. But one team in the East appears to have its sights set on another: starting center Robin Lopez.

In light of the recent news that Kevin Love will opt out of the final year of his deal in Cleveland, Adrian Wojnarowski of Yahoo! Sports reported via twitter that the Boston Celtics will try to sell Love on a trio of him, Robin Lopez and Paul Pierce.

So, this indicates that the Celtics are interested in bringing in Lopez as well as Love. They have a need for a true center.

The Blazers experienced success immediately when Lopez arrived to the Northwest. He allowed LaMarcus Aldridge to play his preferred power forward position and he also helped the defense with elite rim protection.

He had a career year in 2013-14, playing all 82 games for the first time in his career and having career-high in rebounds and the second-highest field goal percentage of his career.  His second season in Portland was solid but not quite as good as his initial campaign. He suffered a broken hand midseason which caused him to miss a big chunk of games.

In the playoffs, Lopez struggled against the Memphis Grizzlies.

Lopez was also playing on a bargain contract, making just over $6 million per season and he stands to get a substantial raise this year in free-agency.

With the growth of Meyers Leonard, the Blazers may be put in a tough position if Lopez is given a huge deal. But at least now we know of one team that will make a run at him.

The Boston media has been saying since May that the Celtics will make a run at Aldridge, as well as Matthews.

Love jumping into the free-agent fire will only make things more interesting when July 1st comes, which is now less than a week away.